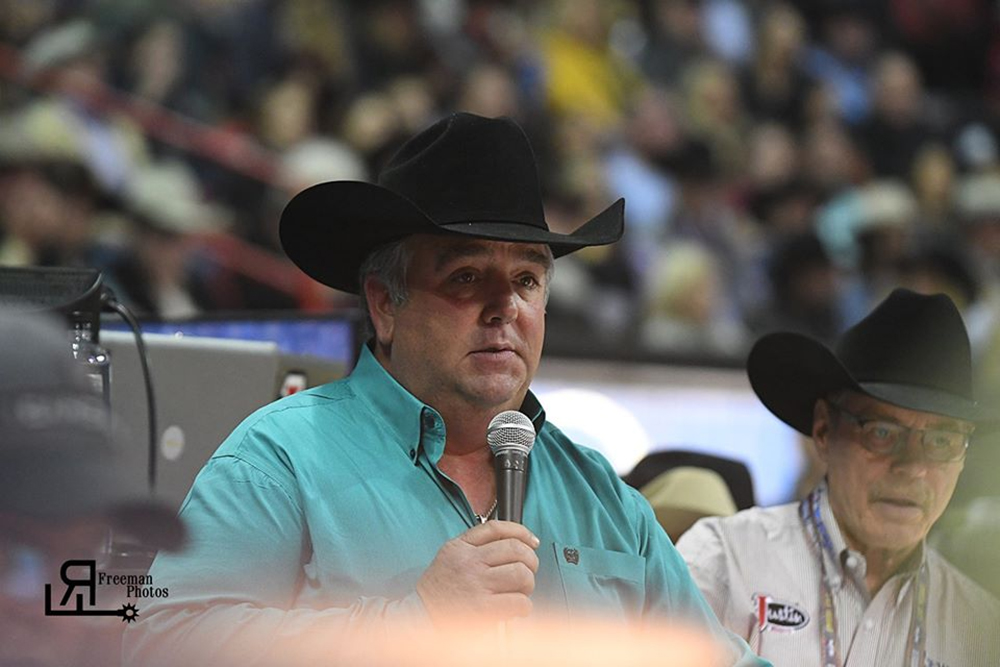 GUYMON, Okla. – At rodeos all across this land, Andy Stewart’s voice has resonated across the grandstands and into the back pens to tell the tales of the sport.

Along with local personality Ken Stonecipher, Stewart has been a mainstay at the Guymon Pioneer Days Rodeo, which will have four performances this year set for 7:30 p.m. Friday, May 1; 2 and 7:30 p.m. Saturday, May 2; and 2 p.m. Sunday, May 3, at Henry C. Hitch Pioneer Arena.

Over the years, Stewart has been recognized as one of the very best in the business. He’s gained accolades and prestige, and this past December, his voice cascaded across Las Vegas as one of three announcers of the National Finals Rodeo.

“That meant everything to me,” said Stewart, an 11-time nominee for the PRCA’s Announcer of the Year. “To earn that goal of being able to get behind the microphone at the pinnacle of our sport is very humbling.

“It was everything I had hoped for. It was magical that first night I got to be on the microphone.”

The magic exists because he is a student of the game. He knows the cowboys, the animals, the events. He understands that some fans in Gunnison, Colorado, may be more tourists, while many of those at Pioneer Days Rodeo have more knowledge about the game. His words and his actions reflect that.

“One of the reasons Andy is so good and highly acclaimed in rodeo is because of his energy,” said Mitch Egger, chairman of the volunteer committee that produces the annual rodeo. “He’s been part of our rodeo for so long, he just feels like family. There are many people that don’t remember Pioneer Days Rodeo without Andy Stewart involved.

“The fact that we got to hear him at the National Finals is a big deal. Only three announcers are asked to be part of the NFR each year, and out of the hundreds of announcers that make a living in rodeo, he was recognized as one of the very best. He added to the NFR experience, and everybody there got to see why we know we have a gem in the Oklahoma Panhandle every May.”

Stewart knows what it takes to work at an elite level. He works many of the biggest rodeos in the country, including the legendary Cheyenne (Wyo.) Frontier Days Rodeo. One reason is because of his energetic, booming voice. Another is the extra work he puts ahead of each rodeo performance so that he can be the perfect voice of the fans.

For every hour he’s on the microphone, Stewart spends many more going through biographies and background and looking over all the important statistics of each competitor in the show. He understands what it takes to compete at an elite level, and he wants fans to realize it, too. It is, after all, the perfect mix of world-class competition and true family-friendly entertainment.

“I’m big on atmosphere,” Stewart said. “There are certain arenas that just have an atmosphere, and Hitch Arena is one of them. It’s part of the fabric of people’s lives in Guymon. It’s so familiar that it feels like home. That’s one thing that makes Guymon special and different than so many rodeos I work.

“Another thing I appreciate about Guymon is that it’s not a very big community, but they continue to bring a world-class rodeo to town. It’s pretty special to me that a town that small can put on a rodeo of that caliber.”

Indeed, it does and has for decades. It has returned to the PRCA’s tour system after being one of the original tour rodeos two decades ago. In 2015, Pioneer Days Rodeo was inducted into the ProRodeo Hall of Fame and is the only Oklahoma-based rodeo enshrined in that museum.

Each May, nearly 1,000 competitors find their way to the region once known as “No Man’s Land” to participate in one of the more popular events in ProRodeo.

“There is so much tradition at Hitch Arena,” Stewart said. “People go there and expect quality, and that rodeo committee delivers quality every year. I don’t think the integrity of the rodeo changed in any way over the years and over the changes in stock contractors. It continues to be a highlight event in ProRodeo and in Guymon, Oklahoma.”