No down time for a dad

Home - Uncategorized - No down time for a dad 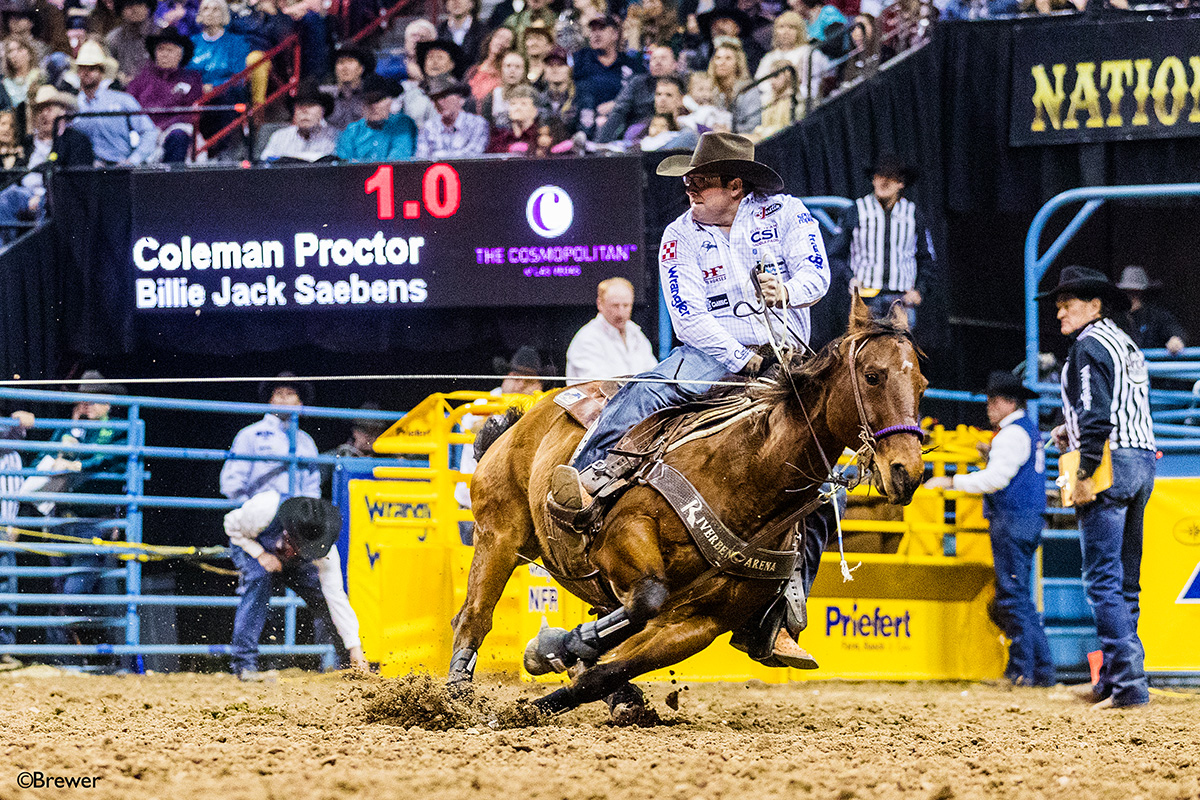 During pandemic isolation, Proctor finding a silver lining to moments at home

PRYOR, Okla. – Anybody who knows him will describe Coleman Proctor in an abundance of ways, but most will discuss his openness and ability to communicate with anyone and everyone.

“I’m a pretty social person, so the hardest thing for me is being so far out of the loop,” Proctor said, describing his thoughts on self-isolation through the COVID-19 pandemic. “It’s like being on my own little island.”

His piece of paradise is 240 acres near Pryor, and he shares that plot of land with his wife, Stephanie, and their two daughters, Stella, 2, and Caymbree, 9 months. On a typical year, he would have just returned to Oklahoma from a spring run California. Instead, he’s been hanging out with his girls, performing tasks around his place and finding a little extra work when possible.

“It’s actually been nice,” he said. “I’ve had a set of heifers I’ve been calving; we have about 240 head of cows, 40 of which were first-year heifers.

“I’ve been catching up on the around-the-house stuff. My youngest has been changing, so that’s been fun to see in person. I got to see her crawl for the first time, and how she’s standing up and pulling herself up to things.”

There were several little things he missed when Stella was this age that he’s not missing with Caymbree. That’s the life of a rodeo cowboy, especially one in the elite status like Coleman, a five-time National Finals Rodeo qualifying header. He’s roped with three cowboys at ProRodeo’s grand finale: Longtime friend Jake Long, Billie Jack Saebens and, most recently, Ryan Motes.

Other than calls and other forms of communication, that’s really all he’s been able to do as far staying in touch with other ropers.

“Motesy and I did a Zoom interview for our friends at Brazos Valley Equine, and that was the first time I’d seen him since we left Houston,” said Proctor, noting that he and Motes had competed in the first two rounds of the third set at RodeoHouston before it was canceled in March. “It was definitely odd leaving Houston and not knowing when we’d see each other again.

The hardest part of being at home, he said, is not having a steady income, which is proof of his roping prowess; he has made a pretty good living roping the horns. For a man who is used to the confidence it takes to pay the entry fees at rodeos and ropings and understand the opportunity before him, it’s a bit of a stretch to know the chances of that have been diminished greatly.

“It feels like you’re spending a lot of money, and you’re not making a lot,” he said, noting that he’s taken on some skid-loader work recently. “I think we get accustomed to how rodeo can be a very profitable business.”

He’s done pretty well over his career, most of it coming in the last six years. At the NFR alone, he has pocketed about $325,000, but that’s even small compared to the big win he and Motes secured at The American in 2019; they each earned $433,000 by winning the team-roping title, $50,000 of which helped them secure their NFR bids.

He’s holding out hope everything recovers quickly from the pandemic, which not only hit the rodeo industry hard but also has affected the overall economy.

“I think we’re going to see a pretty good drought of selling horses right now, and that limits everyone,” Proctor said. “Diesel is below $2 a gallon, and while that seems nice, it’s not good for anybody. Oil fields drive a lot of what we do.

“Still, I love the time at home and the time I get to spend with my family. It’s been a lot of fun. We’ve been able to work on Steph’s breakaway roping.”

Interest and financial support have boomed in breakaway roping over the last two years, and more rodeos are planning to include the event in their schedules. That might open the door for more opportunities for the family.

Doing things with ropes is nothing new for Coleman Proctor. With the support of his parents, friends and other family members, he’s been doing it all his life.

“Even though they were divorced, my mom and dad were very good friends,” he said. “Both would take me roping. Jake Long and I roped together when we were 2 and 3. That’s all I ever wanted to know. My freshman year of high school, Jake and I started going around Miami (Oklahoma) with our Fast Lane (roping dummy). We’d rope in parking lots all over town, and we’ve been kicked out of every parking lot.

“We’d rope in all the different parking lots, and we’d save the Walmart parking lot to last. It didn’t have the best lighting, but they’d let us rope there longer.”

Even then, he had an end goal in mind.

“Even when I got jobs, it as what I needed to do to get my fees paid,” Proctor said. “Working was a way to gather up money. I wanted to rope for a living and make the National Finals.”

He’s done that, and over time, his priorities have changed. That comes with having a family; in his case, Proctor looks directly into the eyes of his three girls.

“I want a gold buckle. Now I’ve made a living with a rope in my hand, but I want something more. Last year was the first time I went to the National Finals and really wanted to win the gold buckle. This is the only reason I’m still doing this.”

Still, he’s ready to get back out on the road and chase his dreams of that elusive world championship. He knows what it takes, and he has faith in Motes that the tandem can make it happen in short order, but there’s work to be done.

“I think being home more is almost making me more excited about getting started again,” Proctor said. “This has been a first-hand look at life after rodeo. You’re getting a free look at what it could be. I know my time on the road is getting shorter. I’m more excited and grateful. I have so much at home that keeps me grounded.

“Sometimes it’s hard to leave and go to rodeo, but I think this year, it’s going to be a little more reactive. At the end of the day, the competition is what drives me.”

Coleman Proctor is a really great guy. He’s my nephew and I have been calling him “World Champ” since he was roping a dummy in his moms yard-wearing cowboy boots,hat, and a diaper ! He is a great man,husband,and father. Oh yeah header too! Lol