Wallace tames the beast in Guymon 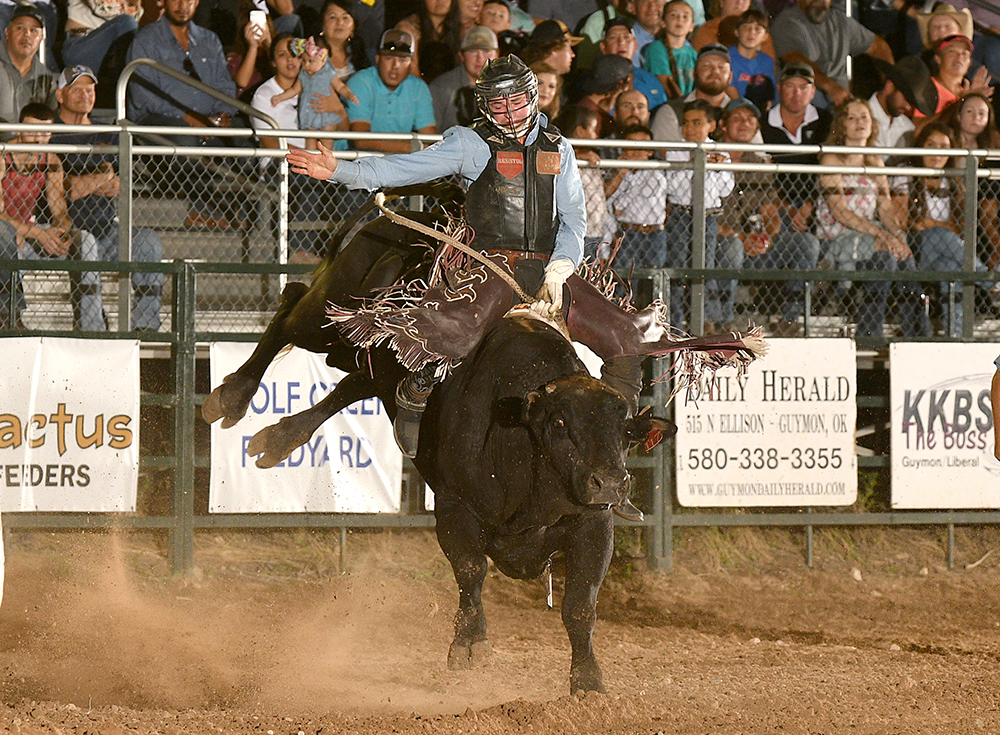 GUYMON, Okla. – Frontier Rodeo’s bull Big Don had a nasty reputation, but that didn’t matter to Ty Wallace, who mastered the beast for 90 points Saturday night to take the bull riding lead at the Guymon Pioneer Days Rodeo.

“I’ve seen that bull a handful of times this year, and he’s been awesome,” said Wallace, a three-time National Finals Rodeo qualifier from Collbran, Colorado. “He’s one of Frontier’s top five bulls, and I was just happy to come to Guymon and get on a bull like that.

“It always feels better when it works out.”

Josh Frost, a graduate of nearby Oklahoma Panhandle State University, had jumped into the lead with an 88.5-point ride on Frontier’s Magic Trick, but then Wallace and Big Don worked their own magic. He will have to wait for the outcome of Sunday’s final performance to see if the score holds up for the Pioneer Days Rodeo title and the cherished trophy buckle awarded to each year’s champions.

“It always helps when the bull bucks hard,” he said. “When they buck that hard, you don’t really have time to think; you just react. I’d say 70 percent is mental. I can sure beat myself up mentally knowing that bull was hard to get away from. It runs through your head, and you try to block it out. I’m just thankful these bullfighters were there and are awesome.”

With a little more than a month left in ProRodeo’s regular season, Wallace was 13th in the world standings heading into this week of rodeos. Every dollar counts, so he knows having a good check at Oklahoma’s only ProRodeo Hall of Fame event will be important.

“Being right there on the bubble with a month left in the season, it definitely helps,” said Wallace, noting that only the top 15 on the money list at the end of the regular season advance to the NFR. “It makes you forget about the standings, and you can just go enjoy yourself and not be pressured.”

Steer wrestler Bridger Anderson has felt a little pressure. He’s been among the top 15 all season, but he’s dipped to 11th heading into this week. That’s why he ran his first steer Thursday afternoon, then sprinted to an airplane for a short hop to Amarillo, Texas, to catch a second flight that day en route to Denver then on to Kalispell, Montana.

“I got to the arena at Kalispell just as they were running the first bulldogging steer in slack after the performance,” said Anderson, the reigning college steer wrestling champion from Northwestern Oklahoma State University. “The next morning, we drove to Burley (Idaho), then I got up early this morning to get on a flight to get back here for tonight.”

Five planes in two days, but he’s placing in Burley and is placing in both the second round and two-run aggregate in Guymon. He posted a 4.1-second run Saturday night for fifth in the round and a tie for fifth place in the average

“It would mean a lot to pick up some money here,” he said. “It would be a great place to keep climbing up the world standings and the (Prairie) Circuit standings, hopefully at least hold the position.”

All he hoped for was an opportunity, and he got it.