Keisners to reunite in Duncan 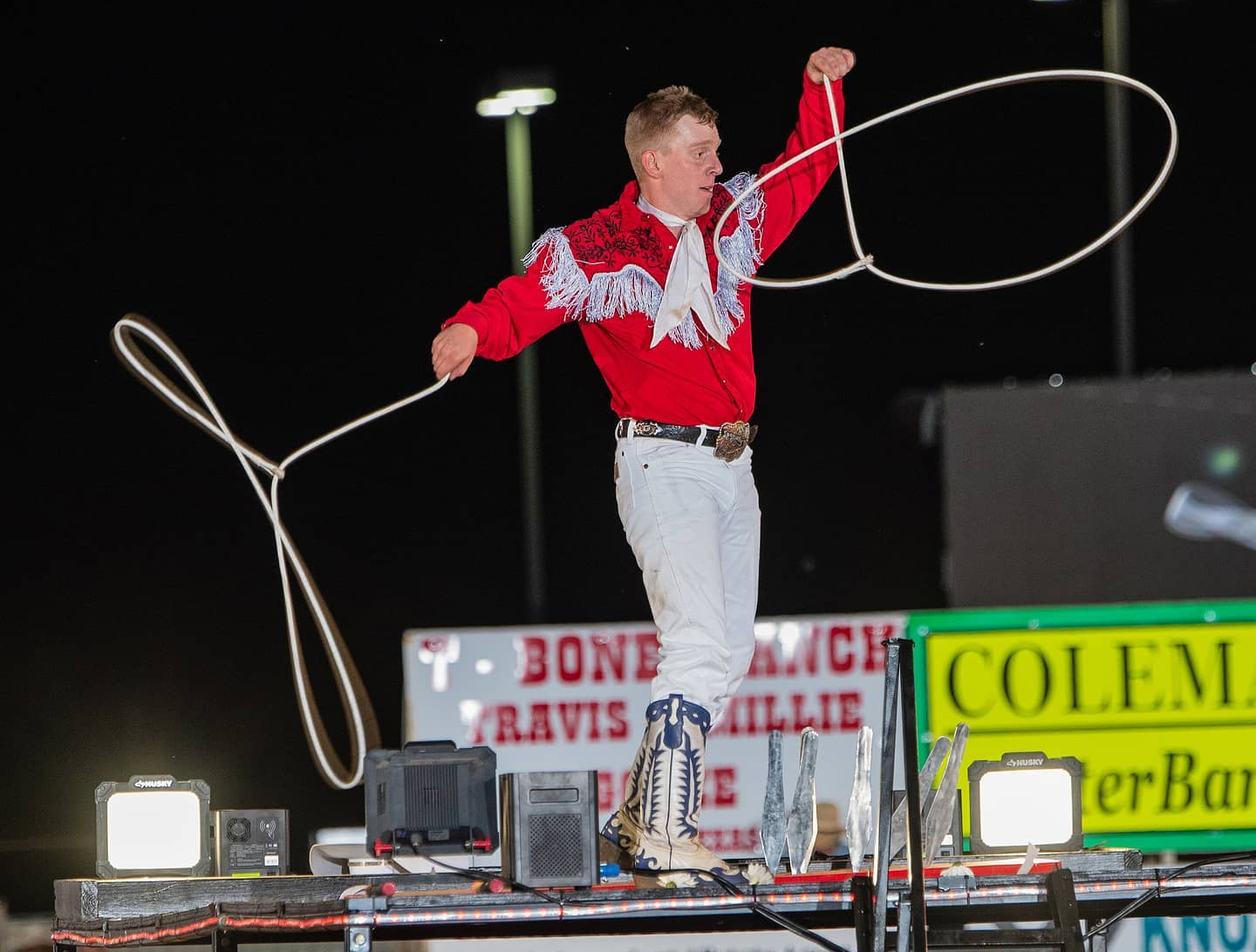 DUNCAN, Okla. – Before he became one of the top saddle bronc riders in the Prairie Circuit, 26-year-old Roper Kiesner was a jack-of-all-trades showman and part of the Kiesner Family’s Wild West Review.

He and his brother, Rider, were part of the traveling circus that hit rodeos and Western events all across the world, led by their dad, Phillip, and their mom, Julie. They were quite the spectacle for several years, beginning in 2005. Now, though, Rider has taken over the family’s reins as far as an entertainer, and Roper is chasing his bronc riding dreams.

“We don’t cross paths as much as you’d think, but we still see each other a few times a year,” Roper Kiesner said. “It’s always fun to be at shows when I see my brother perform. If it works out with what I’m doing, I may help him out.

“He’s one of my biggest fans, and I love watching him perform, too.”

Their lives and lifestyles will come to fruition at the Chisholm Trail Ram Prairie Circuit Finals Rodeo, set for 7:30 p.m. Friday, Oct. 16-Saturday, Oct. 17, at the Stephens County Arena in Duncan. Roper is the third-ranked saddle bronc rider in the circuit, made up primarily of events primarily in the Oklahoma, Kansas and Nebraska region; Rider will be the barrelman and featured performer, along with his girlfriend, Bethany Iles.

“When we first started, I was doing trick roping and whip cracking,” said Rider Kiesner, 28. “Back then, Roper wasn’t part of the act, but he helped out. Then after a couple of years, he wanted to do some roman riding and trick riding, so we got him some ponies.

“In the act, we always had a back-and-forth. I would do some trick roping, then Dad would go, then my brother would go. There was always something going on.”

Their lives are as hectic as ever. In addition to handling their respective businesses in rodeo, the brothers remain active. From team roping to knife-making to countless other adventures, they find many ways to not only make ends meet but also entertain others.

“The difference between being a competitor and a specialty act is quite a bit,” Roper Kiesner said, noting that contract acts receive a fee for their services but cowboys pay an entry fee in order to compete and must finish near the top just to earn money on the rodeo trail. “A guaranteed paycheck is nice sometimes, and you get to be around people more – you’re there for one rodeo the whole week or the weekend.

“As a competitor, you’re always going and doing a lot more driving. You don’t have the guaranteed paycheck, but I love being on the road and doing this.”

It’s a passion that’s been handed down from father to sons, and it’s a lifestyle the Kiesner brothers expect to live the rest of their lives. That’s one reason why Rider Kiesner has added clowning to his repertoire.

“When I first started doing rodeos by myself, I just wanted to be a specialty act,” he said. “A lot of the smaller rodeos couldn’t afford a clown and a specialty act, so I wanted give them a chance to hire me for both.

“It’s really cool working the Prairie Circuit Finals as the clown, because that circuit is known for having some of the best clowns at their finals. I’m following Keith Isley (last year’s clown and barrelman who is destined for the ProRodeo Hall of Fame). That’s pretty scary but pretty fun, too.”

That’s what comes with trying to be one of the best. Both brothers know it. Rider Kiesner has performed at some of the biggest events in the game – including the Cheyenne (Wyoming) Frontier Days Rodeo and the National Finals Rodeo – and he’s been credited for being one of the best in his business for a long time.

Now, he and his baby brother get to showcase their specific skills in the same arena on the same weekend. It’s a chance to celebrate all the years they’ve been in the arena – whether together through their family’s act or in different locales across the country as they chase their dreams.

“I think this is going to be really cool,” Rider Kiesner said. “I’m hoping he wins, then we can have matching buckles. Being able to share the arena is always a lot more fun.”

It’s something they’ve done in some regard most of their lives.

“Ever since I was little, I’ve wanted to do this,” Roper Kiesner said. “My dad was riding saddle broncs when I was little. When I was a baby, my first word was bull or bully because I just wanted to ride roughstock. I’ve always been in rodeo; I was riding when I could walk. We grew up on a horse’s back.

“I’m more of a get-on-and-go type of guy, whereas Rider’s more about training and practicing. That’s why I ride saddle broncs and why he’s an entertainer. It works well for both of us.”