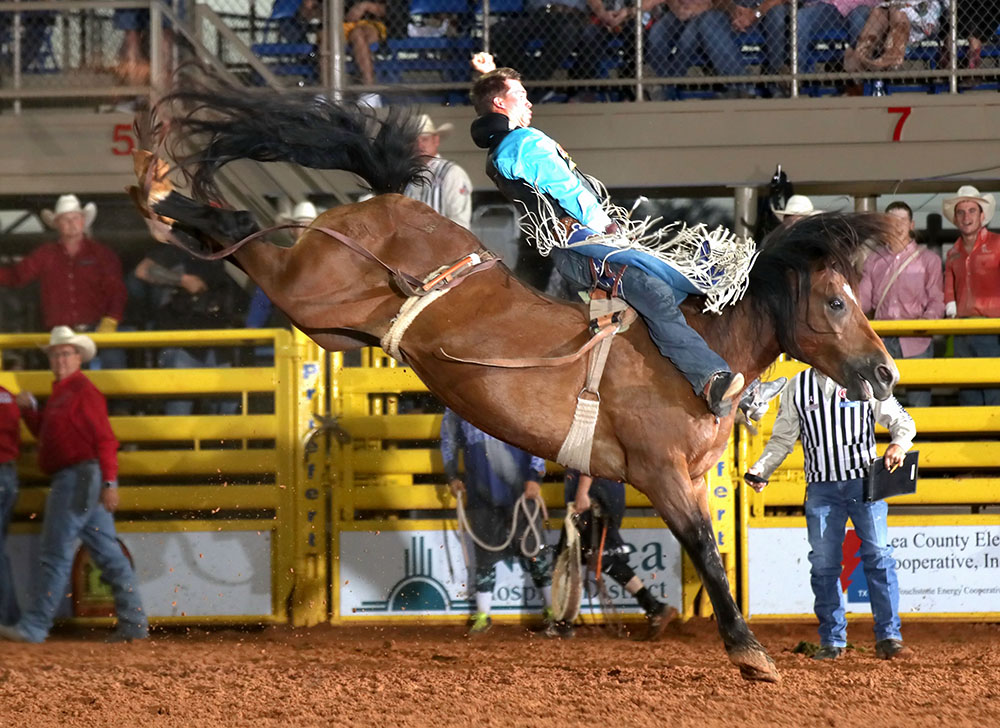 Storied bronc had a distinguished career with 13 NFRs, six round wins

DALLAS – For most of her life, Scarlet’s Web was one of the greatest bucking horses in rodeo. She will be remembered as such by the men who rode her for hundreds of thousands of dollars over her lifetime.

The Pete Carr Pro Rodeo bay mare died Saturday, Sept. 29, after suffering an aneurysm at Timbercreek Veterinary Clinic in Canyon, Texas. Scarlet’s Web was 19 years old and in her first year of retirement after a long and storied career in rodeo, where she was selected 13 straight times to perform at the National Finals Rodeo.

“She was definitely one of my favorite horses ever to ride,” said Tilden Hooper, a seven-time NFR qualifier who rode the magnificent mare to two NFR round wins in his career: the 10th round in both the 2008 and the 2018 championships. “You knew every time you drew her that she was going to take you to the money.

“From a rider’s standpoint, she was going to get up in the air and give you a chance to go on. She was fun to ride. With some horses you win on, it’s more of a fight. With her, it felt more like a dance. She was nice to ride, but she had enough action that she was really electric.”

Her last performance was at the NFR 10 months ago, and it was a fitting end to a magnificent career. Since her first appearance in 2007, she guided cowboys to round victories six times, an unprecedented number that sets the standard for winning bucking horses.

“I had the opportunity to get on her twice, once in Guymon (Oklahoma) when she was at the prime of her career, and again last year at the NFR,” said Tim O’Connell, a three-time world champion who rode Scarlet’s Web for 88 points to finish with the second-best score of the sixth round this past December. “To be 88 points on her then and there, it shows so much about a horse that was 18 or 19 years old and still bucking that well.

“She gave you every opportunity in the world to win. She was always going to give you and honest go and an electric go at it every time. Those were some of the funnest 15 seconds of my life.”

Born in 2001, she is the daughter of the mare Scarlett and the stallion Night Jacket, two of the greatest bucking-horse producers in the history of ProRodeo. At least four of Scarlet’s Web’s full siblings have bucked at the NFR, and dozens more of her half siblings have been there, too.

Billy Jones, the general manager for Pete Carr Pro Rodeo, said the firm has two young Scarlet’s Web fillies at the ranch, one sired by Korczak, a Carr foundation stallion, and Lunatic Fringe, another high-producing stud.

“Both those fillies are big and strong,” said Jones, noting the breeding program just continues to grow each year. “We expect them to be pretty good.”

The groundwork is certainly there. Dr. Gregg Veneklasen operates Timbercreek and was just a few feet from Scarlet’s Web when she collapsed. He has built a solid foundry for breeding at his Canyon facility, with dozens of horses that reside there throughout the year.

“We have a lot of good mares here,” Veneklasen said. “I buried her next to Kattle Kate, the mother to Big Tex, and to Dirty, the mother of Dirty Jacket. She’s buried right there by other Zinser horses that have died here.”

Jim and Maggie Zinser developed a breeding program like no other 50 years ago, and other firms have begun to run with it over time. They were the original owners of Scarlet’s Web and her parents, and that legacy continues forward.

“I’ve seen the filly by Lunatic Fringe out of Scarlet’s Web, and she’s really cute, and she’s a really loud paint with a medicine cap,” Veneklasen said, noting the paint characteristics passed on by the young horse’s sire and also Scarlet Web’s sire. “I’d say she’s 3 or 4 years old now, so she’s bound to have something to her.”

If that filly is anything like her mother, she’ll be a cowboy’s dream.

“Scarlet’s Web was just a good, reliable horse you could count on every time,” said Orin Larsen, who won the rounds he was in both times he was matched with the mare, once at The American in Arlington, Texas, and the other in Lovington, New Mexico. “She went to the NFR 13 consecutive times and was in our TV pen most of the time; I can only name two or three other horses that have that kind of resume.

“I think that horse loved what she did until the day she died.”

She was definitely special, and countless cowboys will recall those moments. Dent, now retired at age 34, won the PRCA’s 2008 tour championship in Dallas on Scarlet’s Web, then added the top dollars as both neared the end of their distinguished careers nine years later.

“She was always a money horse,” said Dent, who estimates his earnings on her back to be near $60,000 in just two times of riding the big bay. “I’m not sure she ever threw anybody off, but guys were always 87 to 91 points on her every time she turned her head out.”

“There are not many of them that stay like that for that long. She’s as good a horse as I’ve seen in my career. If you needed to win a check and you had her, you knew it was going to be a good check and probably help you win first.”

Only the greatest bucking horses in ProRodeo make it to the NFR in a given year, and Scarlet’s Web did it 13 times in a row. Virtually each year, the cowboys wanted her in fifth and 10th rounds, which featured the most electric animals in the game.

She earned her spot in that field each season; once there, she proved why she was always one of the best ones in the herd. It was part of her legacy passed on through the bloodlines she held, but it also was a testament to the type of animal she was for nearly 20 years of life.

“For a horse to be that good for that long, they must have a huge heart,” Hooper said. “She loved bucking, and you could tell it by the way she did it every time.”

Great article but a great mare too. Lots of money won on her for sure.

Thanks, Jim and Maggie. We appreciate all you’ve done for rodeo.