Aus is rested, ready for NFR 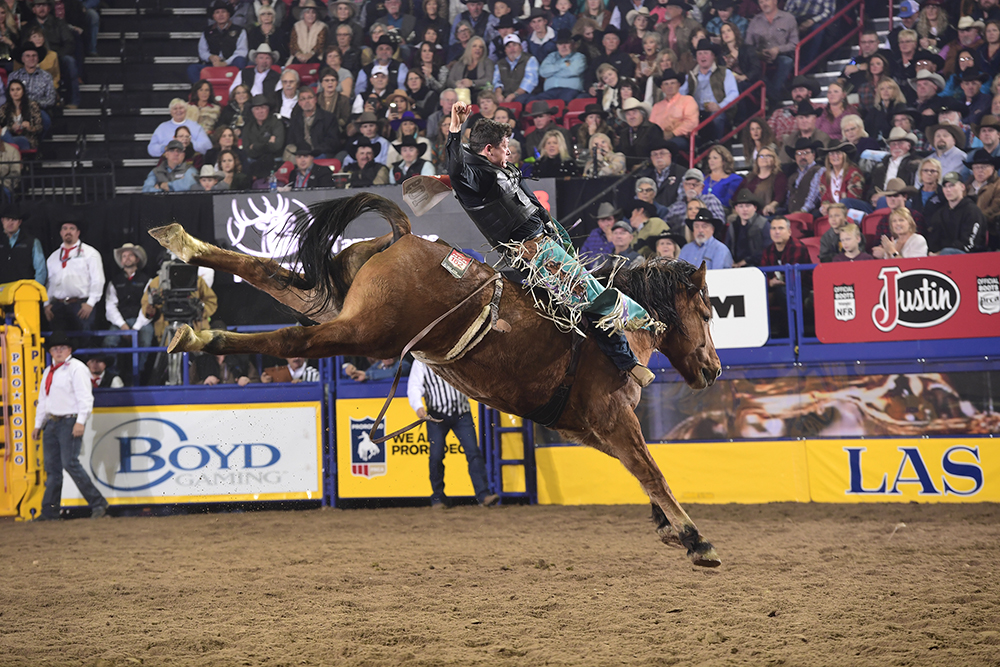 That’s the thing about tunnels: They only last so long. Some are long and winding – much like the 2020, COVID-infected ProRodeo season. Others are short and pass quickly. Through each phase of darkness, Aus found the light each time.

Now the brightest lights in the game will shine on a new arena, as the Wrangler National Finals Rodeo will take place Dec. 3-12 at Globe Life Field in Arlington, Texas. For the fifth time in his career, the Granite Falls cowboy will be part of the sport’s marquee event. This year, though, the global pandemic has forced the championship out of its traditional home in Las Vegas for the home of the Texas Rangers to still allow for fans while also opening space for social distancing.

“It’s going to be different, and I have no idea what to expect once we get there,” said Aus, 30, of Granite Falls. “I expect to perform well and have a good NFR, but as far as the setting, I just don’t know. If they have sold the tickets they’ve been talking about, I’m sure it’s going to be a wild time.

“Making the NFR five times means everything to me. Everything I’ve done since I was 9 years old has been to become a world champion, and you’ve got to make the finals first to put yourself in that position. What I’ve done professionally revolves around that chance.”

Rodeo has always been a family affair. It takes great support to make it this far in an individual sport like this, and Aus has had his share. During youth rodeo, his parents made sure he was outfitted with all the tools necessary. That carried over into his college career, first at Iowa Central Community College, then on to Missouri Valley College.

Through the pandemic season of 2020 – which saw more than half the rodeos across North America canceled – Aus earned $61,726 and enters the Arlington competition eighth in the world standings; only the top 15 contestants on the money list in each event advance to compete at the NFR every year.

“I just entered rodeos when I had a chance to do so,” said Aus, who credits his sponsors – Salty Dog Sister Boutique, Granite Falls Dairy Queen, Jug Waterers, Carroll Spur Co., Phoenix Performance Products and Wrangler – for helping him get up and down the road, especially this season. “Besides being with my family during my time off, I tried to stay in shape and stay focused so when they said it was go time, I felt like I was ready.”

He was traversing the early part of the season as normal, then the world shut down in March. Rodeo went on a two-and-a-half-month hiatus. While frustrating, the Minnesota cowboy found more bright spots than not with his time off the road.

“I had a few different phases,” he said. “Bristol (2) and I started off with fort days, with a different blanket fort every day. I also got a little more productive. I built some furniture for the house and got some things done around here. I bought a tractor and putzed around a little.

“Two weeks after rodeo got shut down, on March 29, we had our son. My wife’s maternity leave and my leave of rodeo lined up almost perfectly. The four of us got to spend a lot of time together. It was really good and nice for Loni to have me around to help make the adjustment from one to two kids by herself.”

The benefits to a reduced schedule were grand, and like most who compete professionally, Aus was thankful for those events that took place despite the restrictions and economic concerns. With fewer stops on the roadmap, each rodeo featured a similar theme.

“The toughest thing was that everybody was hungry and frustrated with the time off, so all the top guys were ready to go anywhere,” he said. “You could show up at a smaller rodeo, and everybody was there fighting for the money. It was good to see, though. We were happy for the opportunity, and it really did bring the best out of everybody.

“If you’ve ever claimed you did this for the love of the sport, this was the time to prove it, because it was tough scratching. It was still fun, but, man, it was tough.”

“It was like a gut-punch every time one of those big rodeos canceled,” Aus said. “It was understandable. I had a feeling a lot of the smaller rodeos were going to suffer because of lack of sponsorship and the fact that the organizers had to think of themselves and the others and keep everybody safe.

“I had a feeling that it was going to be a lot of mid-size rodeos that were going to make it work, and I’m very thankful for those committees that stepped up, brought a community together and put money in the pockets of the contestants. The money was just points toward the finals. Everyone was riding for the same thing, and we were all just praying the NFR was going to happen. So far, so good.”

Though the atmosphere will be much different than that of the Thomas & Mack Center in Las Vegas – host of ProRodeo’s grand finale since 1985 – the opportunity to compete for a world championship is still there. So will be the racing hearts and nervous excitement that comes with being one of the few that will battle it out in 2020.

Globe Life Field is home to the Texas Rangers. Because of the pandemic, it also was the host to this year’s Major League Baseball World Series. It’s been a showcase for professional sports’ best in this rambunctious year already, but it hasn’t seen anything yet.

The greatest cowboys and cowgirls in ProRodeo are ready to light up the snorth Texas nigh life, and Tanner Aus is ready for the competition to begin.

“I will never rely on my past experience to get me ready for something like that,” he said. “I’m going to do the exercises that keep me fresh and protect my joints. I’m staying healthy and feeling good, and that’s really helped me out.

“I’ve still got my basics, my spur board and my bucking machine, and I kick on them when I’m out in the shop. Basically, it’s the same thing I’ve been doing since I was in high school: Focusing on the fundamentals and preparing my mind.”

That’s the game plan of a champion, and all Aus needs is the time to make it happen.