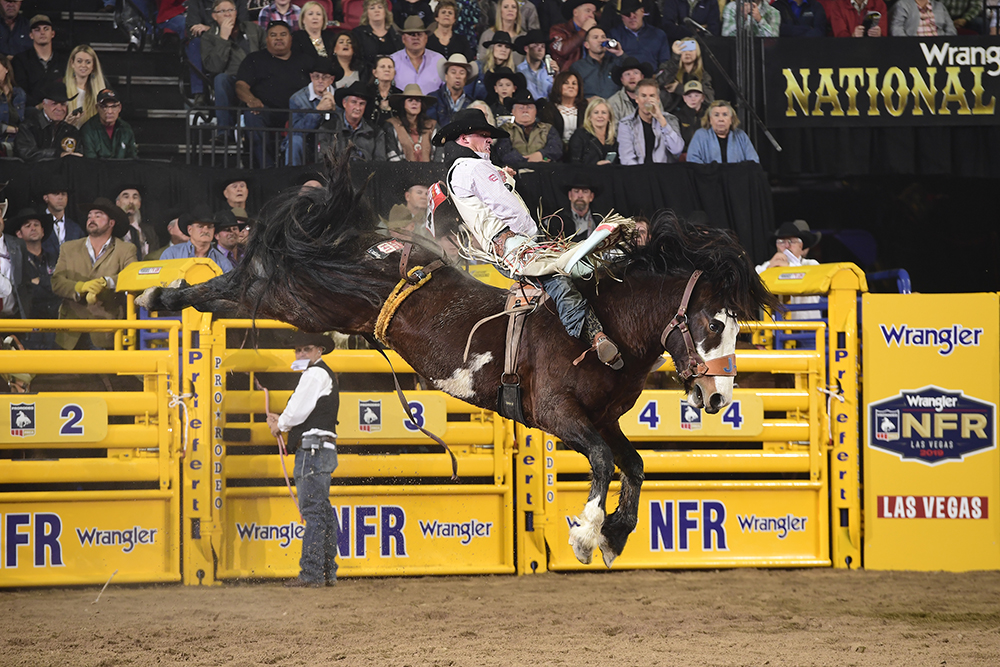 STEVENSVILLE, Mont. – Through the first nine years of his ProRodeo career, Richmond Champion has garnered a list of major accomplishments that many cowboys can only dream about.

The biggest honor, though, has yet to arrive; still, his eyes are set tightly on the prize he covets most: the Montana Silversmiths gold buckle awarded to the world champions. He will have an opportunity to grasp it at this year’s NFR, set for Dec. 3-12 at Globe Life Field in Arlington, Texas. It’s his sixth trip to ProRodeo’s premier event in seven seasons, and the only year he missed was because of an injury that sidelined him much of the campaign.

“Making the NFR is the goal every year, but it’s crazy that it’s coming up on six times,” said Champion, 28, of Stevensville. “It feels like yesterday that I was going to my first one. That feeling of success and accomplishment never gets old.

“There’s been talk about how the guy that wins the gold buckle this year has done it without all those big rodeos. If he came from anywhere below the top five, it will be the hardest gold buckle to win. There was no money to win. There were not big leaps to get into the top 15, much less get yourself in position to win a gold buckle.”

Such is life in 2020, a year in the throes of a global pandemic that has added a “new normal” to the people around the world. Lives were put on hold, restaurants closed and events eliminated. Of the 700-plus annual professional rodeos, more than half were canceled. For cowboys who make their livings eight seconds at a time, it was a major adjustment.

Champion finished the regular season with $64,149, good enough for seventh in the world standings; only the top 15 on the money list in each event at the end of the regular season advance to the NFR each year. In a sport where dollars equal points, each paycheck is vital. The contestants in each event who earn the most money at the conclusion of the NFR will be crowned world champions.

That’s what being a competitor is all about, and he knows what it means. He’s married to the former Paige Lawrence, an Olympic figure skater who was raised in Sasatchewan. Together, they make up a strong couple willing to go above and beyond to make sure their dreams come true.

In 2020, that meant making the adjustments necessary just to stay in the game. Starting from when the pandemic shut down the world in mid-March, Champion figured out a way to keep his eyes on the prize. He worked out every day.

“I usually don’t train that time of year, because you’re traveling to Houston then you’ve got San Antonio and all these rodeos, then you’re rolling into California for the spring rodeos on the West Coast,” he said. “I’m usually getting ready to go to Canada and start my season there. You have no chance to gain ground on fitness, so I worked out a different program, something I’d never do if I was competing.

“I also fished a lot, so I walked six to 10 miles of river a day fishing. Whenever they announced Cave Creek (Arizona) was a go, I was ready.”

Once the season restarted in late May, the schedule was vastly different. Missing were many of the largest rodeos, and many others were delayed. That forced the traditional routes to change.

“It was nuts for a while and made zero sense,” said Champion, who credits much of his success to his sponsors, Yeti, Hooey and Tony Lama. “I was showing up at rodeos that I hadn’t been to in years. Here we are battling for $800 a day. And we were doing all this without any security that there would be an NFR and a chance to win a gold buckle.

“We were just trusting that all this effort was going to be for something. Thanks to the PRCA and Arlington, it wasn’t for nothing.”

It will be a nice return-to-glory moment for Champion when he arrives in north Texas in December. The American – the first-of-its-kind event that has now become part of the PRCA – was produced for the first time in 2014 at AT&T Stadium, which sits next door to Globe Life Field and is home to the Dallas Cowboys.

At that first event, Champion made a name for himself at just 21 years of age when he became the first “qualifier” to win his event. By also being the only qualifier that season, he earned the $1 million side pot. In the six years since, the side pot has been shared by multiple contestants, so Champion still stands by himself.

“My five previous trips to the NFR have taught me what’s important and what’s not,” Champion said. “It comes down to riding 10 bucking horses in a row, and we do that all the time. You can’t let anything get in your head. It’s about working smarter, not harder.

“When I get there, I’ll find that routine, get settled in and get everything on a reaction level. That’s when I’m at my best.”