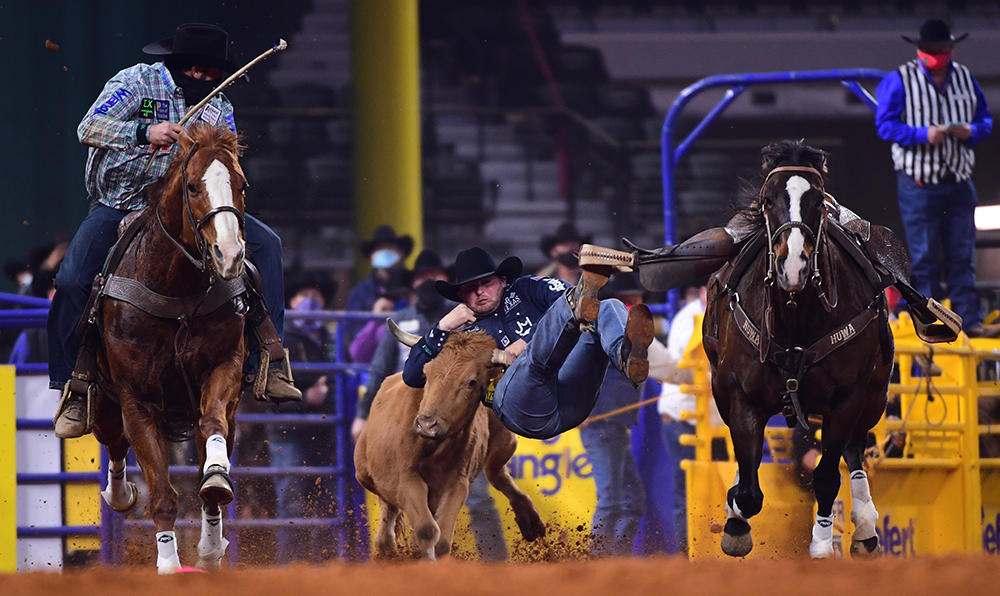 ARLINGTON, Texas – Jace Melvin needed a little space and a little time to collect his thoughts.

He took it Thursday, the day of the opening round of his first trip to the National Finals Rodeo. He stayed at his place in Stephenville – 80-90 miles southwest of Globe Life Field – and made some practice runs, then he turned off his phone. He didn’t turn it back on until Friday.

In the interim, he put on a display that proved why he’s one of the top 15 steer wrestlers in the game, knocking down his steer in 4.1 seconds to finish sixth in Thursday’s first round. It was worth $4,231. He has now pushed his season earnings to $60,456. More importantly, he gained a little more confidence heading into the final nine nights of the 2020 ProRodeo season.

“I wasn’t nervous, but more anxious to go run that first one,” said Melvin, who is originally from Fort Pierre, South Dakota. “With all the stuff going on, the running around and the extra things you do, I just wanted to focus my attention on getting that steer thrown down.”

Mission accomplished. It was a tough competition. There were three men who tied for first place with 3.9-second runs; they each pocketed nearly $21,000. Melvin was two-tenths behind them, and he fell to the bottom spot in the money order.

“That is the best pen of steers we have, and we voted for them to go four times,” he said, noting that there are three pens of bulldogging steers and 10 rounds, so one pen would run more than the other two. “I didn’t think there was a bad steer in that pen, but I knew I had a good opportunity to win something.

“We executed. I got a good start, and I finished the run strong. I was just tickled to scratch a little bit of money to start this NFR. It took a little bit of the weight off my shoulders, too. It just made me realize there’s money to be won here, so let’s go get it.”

Melvin is riding a horse owned by fellow NFR steer wrestler Jule Hazen, who serves as Melvin’s hazer and helps guide the steer in a more direct path to help the bulldogger make a smoother run. Hazen was the second bulldogger to run and finished in 4.4 seconds; while he was just half a second off the lead, Hazen finished out of the money and in eighth place in the round.

“The horse worked great and put my feet on the ground in a great spot,” Melvin said. “I had an opportunity to win the round if I would have made a little snappier run, and I bobbled my feet just a little bit. That’s something I can adjust and change as we go forward.”

Like all sports, rodeo is about making the right adjustments to ensure the best outcomes. There was a surreal moment before the action began that Melvin realized the magnitude of what was taking place and that he’s in a position to win a world championship.

“You’ve done what you’re doing your whole life, but you haven’t done it at that level,” he said. “I was just super glad to get one run. I feel better (Friday) than I did the day before. I was a little anxious, but now I feel good.

“Now let’s do what we’ve done all year and everything I’ve been doing the last five years building up to this and take advantage of why we’re here.”