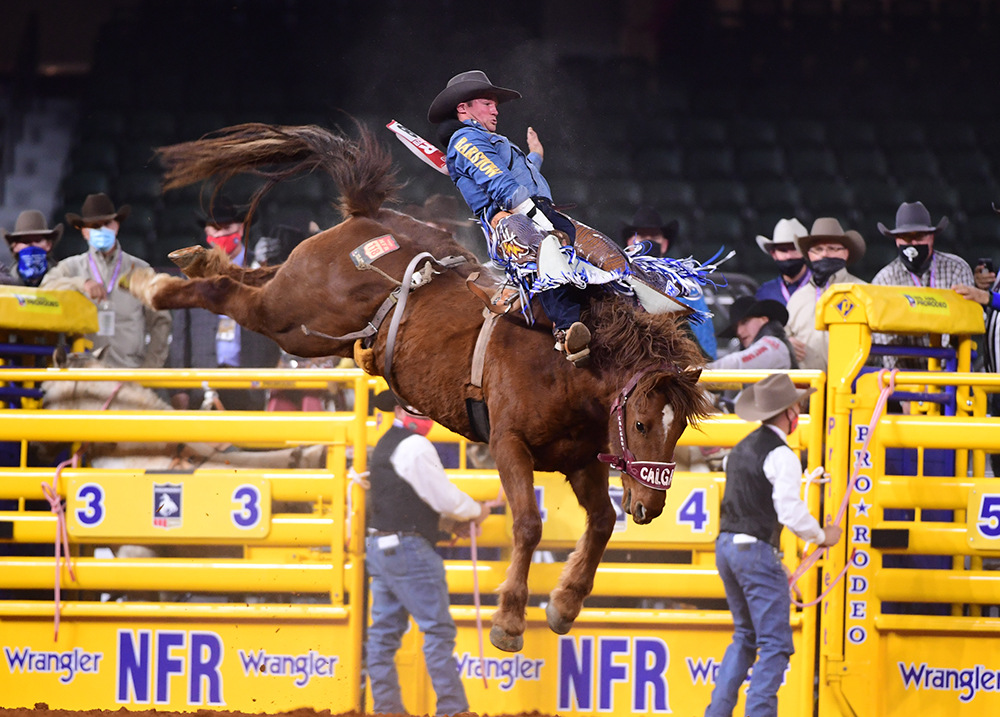 In the two months that led up to Thursday’s opening night, the excitement and magnitude of his accomplishment has continued to build. Being from Texas and having the NFR just an hour from his home in Hillsboro instead of its typical home in Las Vegas might have just been the cherry on top of a terrific sundae.

“As far as nerves to, I was just really excited more than anything,” said Rutherford, who earned his first NFR paycheck by riding Calgary Stampede’s Agent Lynx for 84.5 points Thursday; he finished sixth, worth $4,231. “I haven’t hardly slept in three days because I was so excited.

“Leading up to it (Thursday), with me being first out and as fast paced as it was, there was not time for me to think about it. I had about a minute and a half looking at my horse, so there wasn’t enough time to worry about it, much less think about what was going on.”

It paid off. He and Agent Lynx danced across the Globe Life Field dirt in perfect rhythm, with Rutherford’s spurring motion matching the horse’s bucking style. That’s why he earned a paycheck. The NFR features only the top 15 contestants in each event pays out only the top six places. That means Rutherford’s score was higher that most that rode.

“Words can’t describe getting on my first horse at the NFR,” he said. “The ride itself couldn’t have gone any better. I had an awesome feeling of accomplishment whenever I heard the whistle. It was just pure excitement.

“Having your name beside a Calgary bucking horse at the NFR typically brings a check home, and that’s just from watching past NFRs. Nine times out of 10 if you’re on a Calgary horse, you’re going to win money.”

The COVID-19 pandemic forced many big changes on 2020, and it looks to be aggravating things into the next year. One of those is the NFR, which was moved to Globe Life Field because of limitations in Nevada.

The arena is much different than that of the Thomas & Mack Center, home to the NFR for more than 35 years. The building in Las Vegas is about the size of a hockey rink, while the dirt inside the Rangers’ ballpark is fashioned in the shape of a diamond, only smaller than normal to allow for pens, a warmup area and contestants all in the outfield.

With the state of Texas allowing 50 percent capacity, the spacious Globe Life Field offered plenty of seating and space for social distancing. Of course, none of that would matter to Rutherford, whether he was in Las Vegas, Arlington or the rodeo in Weatherford, Texas.

“The way I prepare to ride, I typically don’t even look more than 20 feet past the bucking chutes,” he said. “As I was walking up to the arena, there was definitely a moment of awe, saying I was here. Once I got in there, my whole focus was on the horse.

“I like to pick my spot. There was a little flat spot about 30 feet out in that arena, and that’s as far as I wanted that horse to get away from the chutes. I like to visualize my ride before anything happens.”