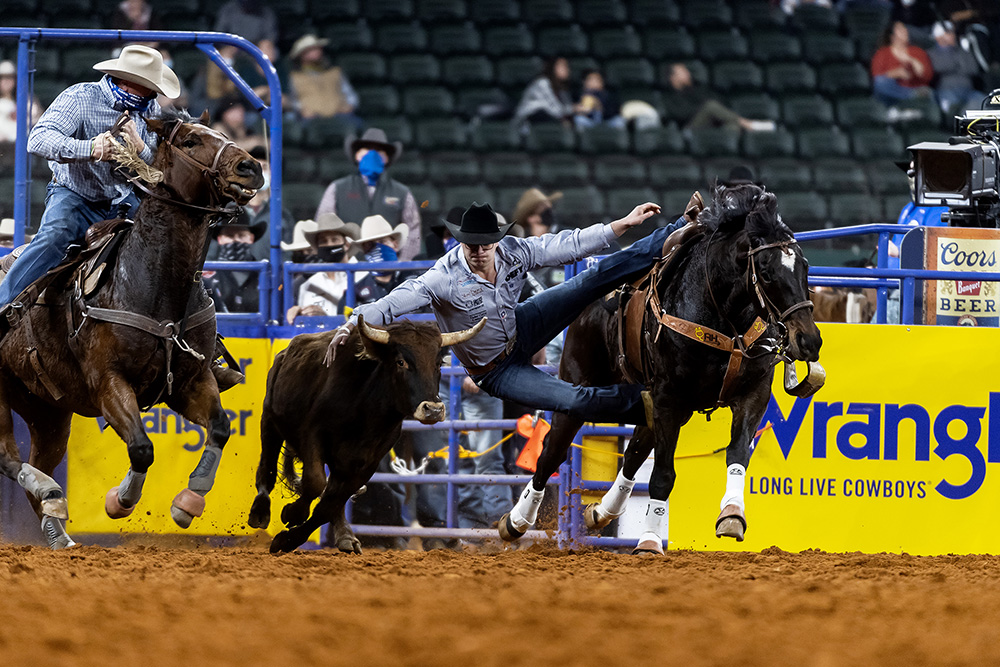 ARLINGTON, Texas – Ever since he was a youngster, Bridger Anderson has dreamed of competing on ProRodeo’s biggest stage.

Once at the National Finals Rodeo, he wanted to prove just why he deserved to be here. After having a bit of a struggle on opening night, Anderson decided it was time to make something happen. His 3.8-second run on Friday night did just that. He shared the go-round victory with two-time world champion Tyler Waguespack and pocketed $23,481 in the process.

“Last night we didn’t have as much luck as we wanted,” said Anderson, 22, of Carrington, North Dakota, now a senior at Northwestern Oklahoma State University. “We came in tonight, and I wanted to be a little more focuses and a little more confident in myself. It paid off. We had a good steer, we made a good start, and that was a lot of fun.”

Anderson entered the NFR 10th in the steer wrestling world standings. He knocked his first steer down in 5.7 seconds, which was the 11th-best run of the night. The refocusing made a lot of difference.

He pushed his season earnings to $77,357 and moved up to fourth on the money list. Waguespack is just one spot ahead in the standings, so both men capitalized on a good situation.

“I’ve looked up to Tyler for a long time,” Anderson said. “Watching him at the NFRs and getting to compete against him, in a way, is a dream come true. I’ve studied his bulldogging a lot and taken things he’s done and applied that to my own. It’s great that I get to split a round with him. It’s kind of surreal.”

Even at a young age, Anderson is no stranger to winning. He’s been a winner through various stages of his life. As a freshman in college, he won the inaugural Ote Berry’s Junior Steer Wrestling world championship. He was 18 years old.

A year and a half later, he earned his biggest prize of his lifetime by winning the steer wrestling national championship at the 2019 College National Finals Rodeo. Since the college finale was canceled because of the COVID-19 global pandemic, he remains the reigning titlist.

He still utilizes the education he receives in Alva, Oklahoma, by traveling the rodeo trail with his coach, Stockton Graves, who is also serving as Anderson’s hazer helping keep the steers lined out for the most optimum runs possible.

The fun continued, as the cowboy took his victory lap alongside Waguespack.

Congrats Bridger!! You dont know me but I am a fan and a big fan of your mom. Way to make ND PROUD!! especially now when we all need a smile!