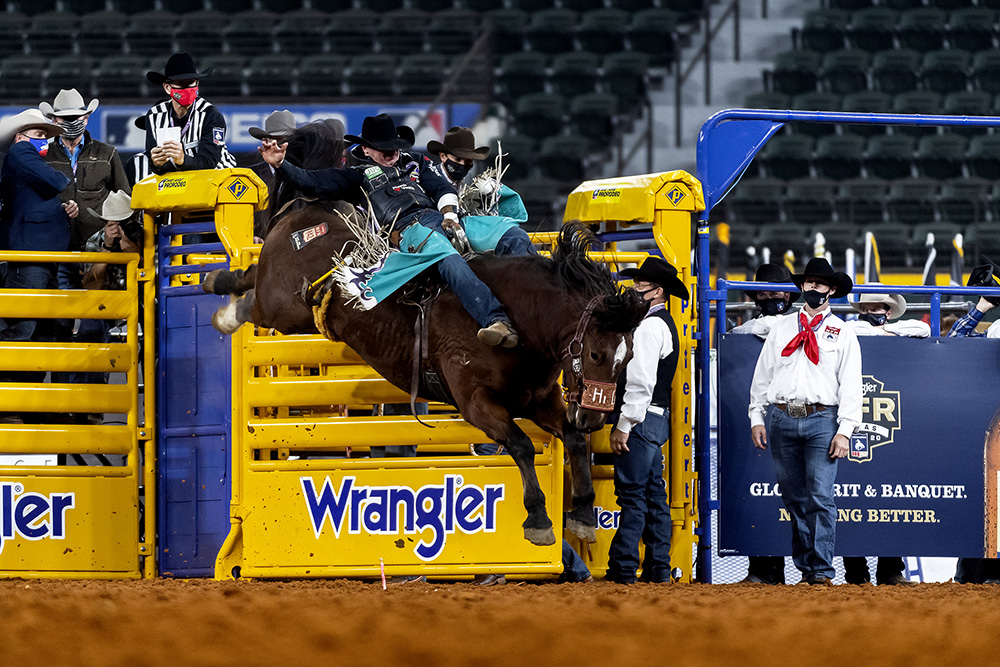 ARLINGTON, Texas – Tanner Aus knows how important it is to have a good start at the National Finals Rodeo.

Now in his fifth appearance at ProRodeo’s grand championship, the Granite Falls, Minnesota, cowboy has seen a variety of experiences over the years. It can be a true roller coaster of finishes and experiences. After falling off the pace during Thursday’s first round, Aus knew he had the chance to make his fortunes change Friday night.

“That was a great big, scary bay horse, and he’s in great shape and had a great trip,” Aus said. “There’s no better place to have a good ride than the National Finals, and I was happy it worked out.  I’m standing there in the winner’s circle in Round 2 against a tough field of competition this year. It means a lot to be here.”

He actually got a decent start in the opening round, scoring 83 points on Pickett Pro Rodeo’s Freckled Frog. He was seventh in the round, but the NFR pays only the top six spots on the leaderboard. Scoring the winning ride a night later did some big things to the Minnesota cowboy.

“It’s definitely a confidence-builder,” he said. “Everybody wants to jump out there and win the first round and the second round. It helps get momentum going, but it’s 10 rounds long. Last year I put myself out of the average in the first round, and I scraped my way back into the average by the 10th round.

“Anything can happen. You just have to focus on one horse at a time.”

Because of the pandemic, the NFR was moved from its typical home in Las Vegas for a year, and Globe Life Field in Arlington has opened its doors to the world’s best cowboys and cowgirls for the season. The Thomas & Mack Center is the basketball arena for the University of Nevada-Las Vegas, so playing in the home of the Texas Rangers is a bit different than what’s been seen in recent years.

“There are pros and cons to the switch,” Aus said. “The atmosphere is different, but it’s still great. The competition is the same. The guys are as hungry as ever. We put on as many miles this year as we ever have, and we rode for less money, so I’m glad we have an NFR.

“I love how it’s set up. We’re in a baseball park, so it looks like a diamond.”