Rutherford fires off shots at NFR 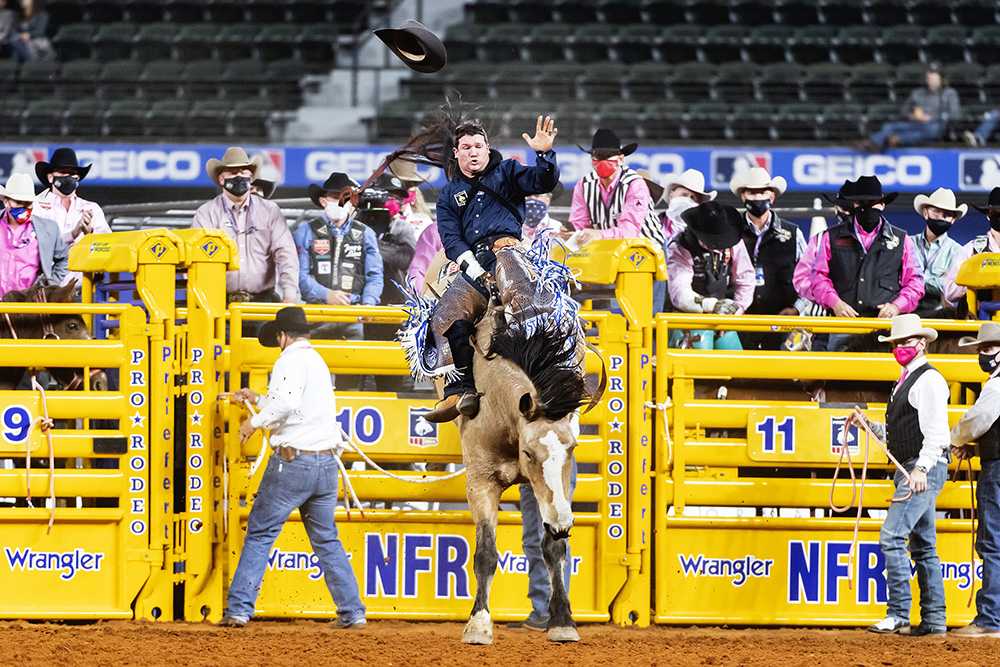 ARLINGTON, Texas – Chad Rutherford had a bit of history with Frontier Rodeo’s Gun Fire, a powerful horse that’s been prolific for high scores and wild buckoffs.

In July, Rutherford and Gun Fire matched together for 90.5 points to win the Cody (Wyoming) Stampede, one of the many rodeos that helped propel the Hillsboro, Texas, cowboy to his first appearance to the National Finals Rodeo.

It seems to be a match made in rodeo heaven. The two joined together again Monday for another magical score, as Rutherford scored 88 points to finish second in Monday’s fifth round of the NFR.  It was worth $20,731 and pushed his earnings to $72,374 for the year, nearly $35,000 of which has come over the opening five nights of ProRodeo’s grand championship.

“I was just tickled to death when I saw I had him again,” he said. “That’s a strong, great bucking horse. I had this bad habit that whenever I get on a horse that I’ve been on before and done really well on, I relax and don’t do quite what I should or I don’t ride them as strong as I should or as I did the first time.

“All I thought today was, ‘Bucker, bucker, bucker.’ Right before I was nodding my head, I was thinking the same thing. He was exactly what I imagined him to be in my head. The ride went exactly how I imagined it, too.”

“I like to think of my riding style as aggressive,” Rutherford said. “When I start to feel my feet come back (to the rigging), all I can think about is sending my feet back as hard as I possibly can. On a horse like that, it is exactly what you want to do, because if you don’t, they may get away from you.”

This was just his second paycheck of the week so far. He failed to finish among the top six in the second, third and fourth rounds, and was treated quite harshly by Pete Carr Pro Rodeo’s San Angelo Sam during his 66.5-point ride in Saturday’s third round. He hasn’t let it bother him, because he understands that’s part of the game.

“I’ve become a stronger Christian this year than I ever have in my life,” he said. “This year weas just a great testament to what my life has been like. When I’ve had a weakness or an outcome that has been slightly less than desirable, all I’ve got to think about is the great opportunities God has given me.

“I just want to give it to Him and trust that God will be my vindicator for the rest.”

With faith like that, Rutherford knows he has five more nights of opportunities.