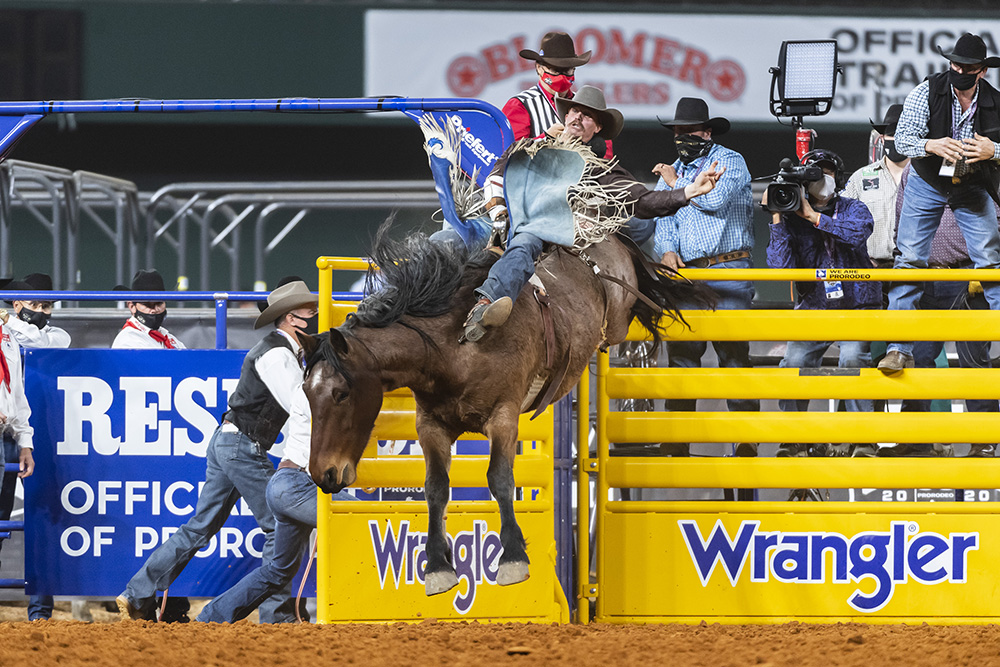 ARLINGTON, Texas – That breeze that blew through Inglis, Manitoba, was actually a huge sigh of relief from Globe Life Field in Arlington.

“It’s a marathon, not a sprint,” said Orin Larsen of Inglis, who earned his first paycheck of this year’s National Finals Rodeo during Tuesday’s sixth round with an 86-point ride on The Cervi Brothers’ Ain’t No Angel for fourth place, which was worth $11,000. “I’m just trying to work my way back into contention if that’s possible. If not, then I’m just here enjoying myself. That’s all I can really do.”

Larsen has had a rough start to his NFR. For whatever reason the horses underneath him haven’t performed to the optimum level, but that’s part of the game. He understands that as well as anyone, now competing in his sixth straight championship.

But it doesn’t make it easy, especially with a payout this big. Go-round winners are earning $26,231 each night, and to go without anything for five straight nights can drive a competitor nearly mad. That’s just not Larsen’s style.

“I think a lot of dealing with it is the power of prayer and keeping strong in my faith and knowing everything is going to be OK,” said Larsen, who now lives in Gering, Nebraska. “No matter what happens, God has a plan. This might not be my year this year, or it still might be, I don’t know, but we’ll figure that out.

“My wife has kept me positive. A lot of friends and family are behind me, and I am really grateful for all them.”

He knew exactly what to expect out of the Cervi horse. Ain’t No Angel has been a top bronc for many years. Mason Clements rode the powerful roan for 87 points in the opening round last Thursday.

“I was wanting to get on that one,” Larsen said. “I’ve been on that one quite a few times, and I’ve always had luck on him and made money. I knew it was just a matter of time for me to draw something good, something that will work for my style. It feels good just to get a check finally, and we can only go up from here.”

That’s true. Actually, the Canadian cowboy has been in this boat before. At the 2016 NFR, he suffered separated ribs and didn’t cash a check until the sixth night after he learned how to ride through the pain.

The only injury this year has been to his ego, but his confidence remains high. He has been riding well and just needed a good shot to make it happen. He would like it to continue.

“As far as making money, I’m not worried about it,” he said. “I still need to try like hell. Everybody is riding good, and the horses are working well. It’s going to be a grind, but it’s going to be exciting just to keep going.”