Champion rebounds in Round 9

Home - Uncategorized - Champion rebounds in Round 9 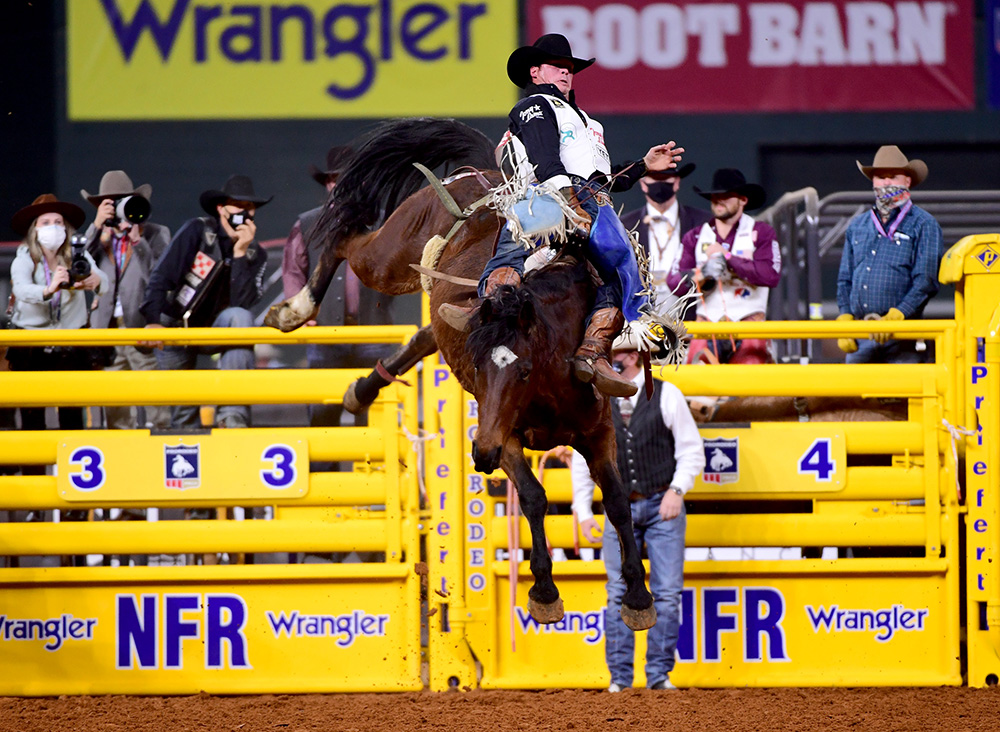 ARLINGTON, Texas – If practice makes perfect, then Richmond Champion was very ready for Friday’s ninth round of the National Finals Rodeo.

“I won Missoula (Montana) on him last year, and I just got on him as a practice horse for the NFR, so I was really pumped,” said Champion of Stevensville, Montana. “He was way better here than he was either of those times. I knew he was going to be tougher than any of the other horses out in this pen.

“He’s got a little bit of a drop and sometimes he moves ahead. Today he had the drop and was up under himself, so it was pretty awesome. It felt really good on my end.”

Now in his sixth NFR, he knows what it takes to win big money at ProRodeo’s grand finale. That came into play after getting bucked off in Thursday’s “Eliminator Pen” by Northcott-Macza’s Spilled Perfume.

“I got a little bit of a stinger,” he said, referring to a pinched nerve in his neck. “That third jump, she went left, and I just got a hair behind her, didn’t have my feet set and took it all on my arm. My whole arm went numb. The next thing you know, I’m looking down at my rigging thinking, ‘This is not good.’ By the time I got behind the bucking chutes, my fingers were tingling again.”

He was also No. 1 in the average race, then fell to seventh with 680.5 points on nine qualified rides.

“It sucked, and I was pretty upset,” said Champion, who attended nearby Tarleton State University on a rodeo scholarship. “You just reassess and make the next goal: ‘What is the next thing I’m going to accomplish in this situation, and they are paying average checks that ride nine head the best.’

“I’ll win as much as I can and try to get a good fifth- or sixth-place average check and call it a successful week.”

He’s still had a solid week, which nearly $80,000 grand stands as a testament, but competitors get flustered when their beaten. For Champion, he just leans on his wife, Paige, who is a retired Olympic figure skater.

“She let me do my thing last night, and we talked about it this morning,” he said. “She is a great support all the time. She has great timing. She knows when to say it and when to let me deal with it on my own, then we will come back to it.

“Today, she said ‘Just go make the ride you want to make and have fun.’ Things are looking up, and I’m excited for tomorrow.”