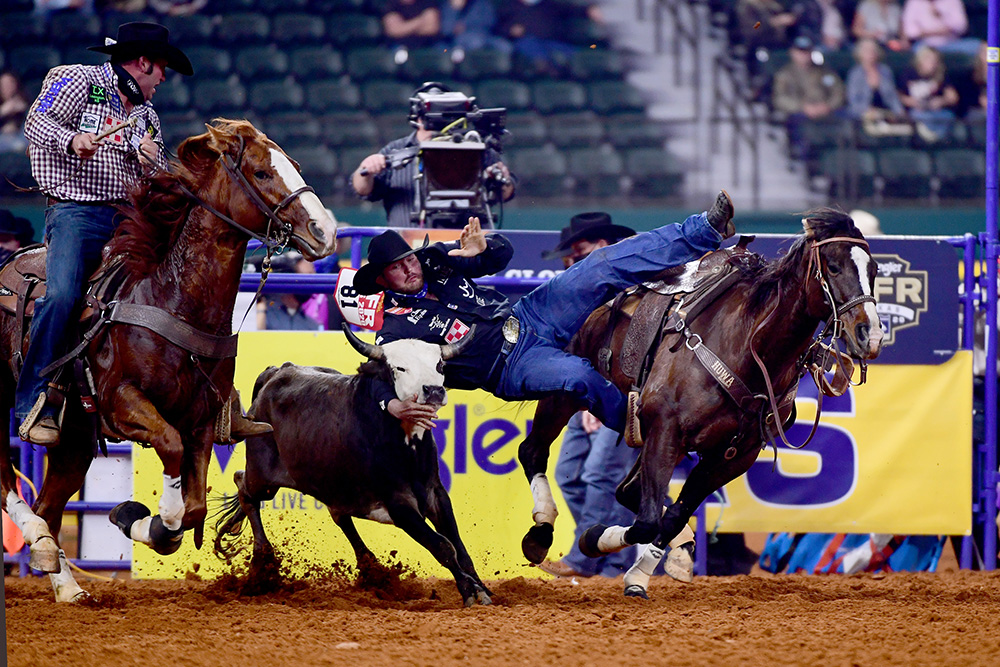 ARLINGTON, Texas – The good comes with the bad and vice versa; that’s life, and that’s also the National Finals Rodeo.

Steer wrestler Jace Melvin has experienced a bit of both over the past nine days inside Globe Life Field in Arlington. He earned his first paycheck on opening night, then waited four nights for his second, a go-round win sharing run of 3.9 seconds. He followed that with another placing in Round 6, then things didn’t really go his way.

He was off the pace on the seventh night, then didn’t get the clock stopped for 24.6 seconds on the eighth.

“I just needed to get back to what I do,” said Melvin of Stephenville, Texas, originally from Fort Pierre, South Dakota. “I’ve been fighting lower back stuff, but the sports medicine got me to feeling right.”

He went in for treatments after Thursday’s run, then again twice on Friday. He felt normal, and he looked pretty good, too, grappling his steer to the ground in 3.7 seconds to finish fifth in the ninth round. That was worth $6,769 and pushed his NFR earnings to $53,365

He will return to the Justin Sportsmedicine team a couple more times before Saturday’s final round of the 2020 ProRodeo season.

“I’m going to try to finish off the week as strong as I can,” he said. “I’ve learned a lot. It hasn’t been exactly how I’ve planned it out, but I’ve taken a lot from it. I’m exited for what tomorrow brings and what the future brings.

“Anytime you can win a check, you feel pretty dang good here. It’s been a pretty tough bulldogging this week. They aren’t just giving checks out.”

No, they are earned. Three men earned a share of the Round 9 victory, and they stopped the clock in 3.5 seconds. Melvin’s 3.7 would typically get a bigger check, but he’ll take what he can get. He is less than $500 from crossing the $100,000 mark for season earnings.

“(Thursday) night didn’t go how it was supposed to go,” Melvin said. “Tonight, I thought, ‘Go at the barrier and throw him down fast.’ They hadn’t won anything on that steer, but I knew I had a chance.”

He sits eighth in the average with a cumulative time of 79.1 seconds on nine runs. If he remains in that spot when Saturday night concludes, he will earn a bonus of $6,346.

“I have a chance for two checks tomorrow in the round and the average. I still have nothing to lose. Any time you have a chance to win two checks on the last night, it’s always a great opportunity to be in.”