FORT WORTH, Texas – The inaugural Tuf Cooper’s New Year’s Eve Roping and Concert was part of a celebration that culminated in a magnificent wedding.

Cooper and other organizers are making it a tradition, and the next step is this year’s event, set for 7:30 p.m. Tuesday, Dec. 31, at the Cowtown Coliseum in Fort Worth.

“It was actually my mother’s idea, because we never had something good to do on New Year’s Eve,” said Cooper, a four-time world champion from nearby Decatur, Texas. “We’d been talking about it for years, and when I was getting married last year, I said we could do it.

“She said, ‘Let’s continue to do this thing. It’ll be an annual event for your anniversary. It’ll be a fun event after the NFR.’ ” 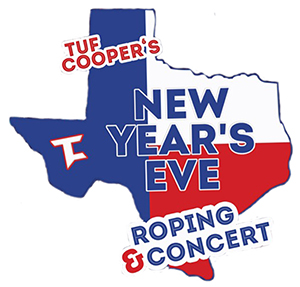 So it began, and so it continues. Coliseum doors open at 5:30 p.m., and fans will have the opportunity with a meet and greet with the more than two dozen cowboys in the field, including world champions like Cooper, Trevor Brazile, Shane Hanchey, Junior Nogueira, Tyson Durfey, Marcos Costa and Monty Lewis.

The roping will begin at 7:30 p.m., then concerts featuring Jarrod Morris and Shea Abshier and the Nighthowlers is set to begin at 9:30 p.m.

“It’s just an exciting time right after the National Finals Rodeo, everybody’s excited about the roping,” Cooper said, adding that it’s going to be a family-friendly event for event-goers of all ages. “You do the holidays and Christmas, and it’s just a great time of year. This is the last chance to reflect and appreciate the year that you had and are getting ready to move forward with the new season.

“All the fans are coming off the excitement from the NFR, and they’re really familiar with rodeo at the time.”

For 11 of the cowboys, they will be just two weeks removed from the most stressful 10 days of their season. All had battled through the rigors of the regular season to qualify among the top 15 contestants in their events to advance to ProRodeo’s championship, a 10-night battle royale set for Dec. 5-14 in Las Vegas that will crown world championships.

The Cooper roping will still feature a world-class competition but in a more relaxed environment. Of the 27 men in the field, all but eight have played the game at the NFR.

“We’ve got a lot of world champions and a lot of NFR qualifiers, a lot of guys that are going to be competing at the NFR this year,” Cooper said. “There are a lot of other good guys with a lot of talent. We wanted to provide opportunities to those guys, like John Douch, who have a great talent but are just a little bit shy of making the NFR.

“It was such a fun event last year, because I had the event right before I got married. Everybody was loose and laid back. That’s the culture we’re trying to obtain and that we’ve created. Hopefully it stays that way.”

There’s a reason behind that thinking, too. Beginning in January, rodeo cowboys will travel tens of thousands of miles a year to make their livings in the sport they love. Once the summer heats up, it’s a non-stop push to be one of the best through the end of the regular season with hopes of returning to Vegas again in December 2020.

That means all-night drives and multiple runs in a day during key stretches of the year. There are times of little sleep and road-weariness that come with playing the game they love. A break from the stress and a chance to have some fun together is a vital way to reinvigorate the cowboys involved.

The New Year’s Eve roping will feature $10,000 in “added” money, meaning Cooper and other organizers have raised sponsorship dollars that will be mixed with entry fees to make up the total purse.

“I want the added money to grow every year, that way we can turn it into a big-time money maker for the guys,” he said. “I want it all to be healthy … a good, fun New Year’s Eve celebration. I want it to be good for the contestants, producers, announcers and fans. I want it to be the funnest event we go to every year because there’s not a world championship up for grabs, but it’s where the competition is super.”

Throw in some good, Texas County Music, and it makes for a great evening for everyone involved.

“Both of these acts are up-and-coming stars in Texas Country Music,” Cooper said. “That’s just going to make the night that much more fun.”