GUYMON, Okla. – The Guymon Pioneer Days Rodeo is returning to the national stage, just where it belongs.

The Cowboy Channel will air the 2020 rodeo, and local committee organizers have signed a three-year contract to extend the coverage of Oklahoma’s only ProRodeo Hall of Fame event. It will be the first time since 2004 that Pioneer Days Rodeo – set for 7:30 p.m. Friday, May 1; 2 and 7:30 p.m. Saturday, May 2; and 2 p.m. Sunday, May 3, at Henry C. Hitch Pioneer Arena – will be televised nationally. 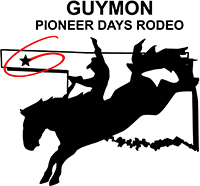 “With the contract with The Cowboy Channel, we’ll actually have the opportunity to increase our added money for this year and, hopefully, beyond,” said Mitch Egger, chairman of the volunteer committee that produces the annual rodeo.

Added money is the financial support put up by the local committee. It is mixed to the contestants’ entry fees to make up the total purse in each event.

Rural Media Group, which owns The Cowboy Channel and RFD-TV, agreed to a multi-year contract with the Professional Rodeo Cowboys Association last September. With the PRCA’s financial investment into Pioneer Days Rodeo, that will offer more enticements for the cowboys to make their way to the Oklahoma Panhandle for the first weekend in May.

“I think it’s great that the PRCA and us will be giving back to the cowboys and cowgirls, because they’re the ones who make it happen,” Egger said. “I think this TV deal speaks to the size and importance of our event in the rodeo community as well as its importance in the local community. It lets people around Guymon know that this is still one of the predominant rodeos in the circuit.”

It has been for more than two decades. It became part of the ProRodeo Tour in 1999 and was a major stop on the tour for several years. In fact, it remained a tour event even after the television contract was downsized in 2005. To return to a national television audience offers the community and all of the region to promote itself.

“Being on national TV is everything for exposure,” said Jada Breeden, director of the Guymon Chamber of Commerce. “When you think of all the people that get to have a sneak peak into our town, it’s incredible. They will get to find out how amazing the people in this community are.”

That sentiment has been around for decades. Maybe it’s an extension of those who survived the dust bowl days of the 1930s, there is a defining character to the area once known as “No Man’s Land.”

“Having our rodeo on TV shows the cowboy spirit and rodeo is still alive and well,” Egger said. “We’re pretty isolated out here, but to put on an event like this in the Oklahoma Panhandle is a big deal, considering the people across the country that will be watching it.”