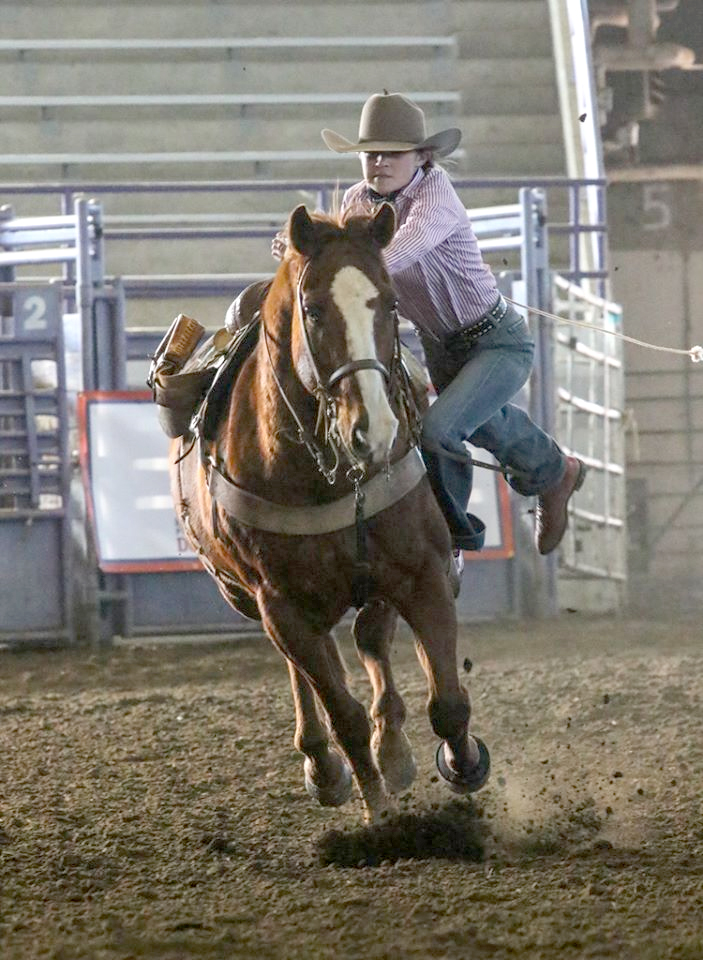 ALVA, Okla. – Megan Turek hasn’t capitalized on circumstances as well as she would like this season for the Northwestern Oklahoma State University rodeo team.

She’s hoping it all changed this past weekend in Manhattan, Kansas, where she made two solid goat-tying runs to finish second at the Kansas State University rodeo. It more than doubled her points on the 2019-20 season and moved her up two spots to seventh in the Central Plains Region standings.

“I had made a few mistakes in the (first) round, but thankfully it all worked out,” said Turek, a junior from St. Paul, Nebraska. “Hopefully it’ll set the tone for the rest of the spring.”

That’s vital if she intends to qualify for the College National Finals Rodeo in June. There are five events remaining on the regional schedule, and she’ll need to finish among the top three in the standings at the campaign’s conclusion if she is to advance.

Turek stopped the clock in 7.0 seconds to place in a tie for fourth in the opening round. She was then 6.8 seconds to finish second in the championship round and the two-run aggregate.

“The goats were pretty tricky, so you had to be pretty aggressive with them and make sure you had them all tied,” she said. “It was more about being smart. You had to do all the fundamentals correctly.”

It’s also an experience to compete in historic Weber Arena.

“It’s definitely different, and a lot of goat horses don’t work there,” Turek said. “I don’t know why, but a lot of horses were cutting girls off. I knew mine wouldn’t, but it took quite a few girls out. It’s fun, especially when it’s packed full. It’s a neat building you don’t see everywhere.”

She has quite a bit of trust in her equine partner, Bugs, a 16-year-old sorrel gelding that has served as a ranch horse for the family in Nebraska.

“He drew the short stick and gets to be a goat horse,” she said with a laugh. “He’s not really nice, but he works for me.”

Turek wasn’t the only Ranger to collect points in Manhattan. She was joined by barrel racer Kayla Wilson of Quincy, Illinois, who finished third in the first round, fourth in the short round and second place overall.

A trio of steer wrestlers also grabbed points, led by Colt Madison of Whiting, Iowa, who finished second in the aggregate. He was followed by Jace Rutledge of Harrisonville, Missouri, who placed fourth, and Bradley Ralph of Wann, Oklahoma, who finished in a tie for first in the opening round and placed sixth overall.

Bo Yaussi of Udall, Kansas, earned some valuable points in tie-down roping, placing in both rounds and finishing in a tie for fourth in the average. Meanwhile Kass Bittle of Krimlin, Oklahoma, was solid in his two runs with partner Sam Goings of Oklahoma Panhandle State University to finish second in team roping, while the team of Brandon Hittle of Topeka, Kansas, and Jayden Laubhaun of Follett, Texas, finished second in the first round and sixth overall. Daniel Durkes of Eskridge, Kansas, and Cole Koppitz of Alva finished fifth in the opening round.

For Turek, the strong start to the spring portion of the season is a good indication, but she understands what’s ahead of her and the rest of the team.

“I’ll keep practicing hard, keep working at it and keep a good mindset,” she said. “We have a lot of girls that are really good in all the events, so we just need them to fall together on the last few weekends of the season. I know, for sure, that we have the girls to do it.”